If you follow me on my socials then you’ll likely have seen me posting about going to the Scot-Pep event yesterday, I had meant to talk about it before now but had so many other things on my mind. No worries though, I figured I’d fill you all in on what Scot-Pep is and what was happening at the event.

Scot-Pep is a charity organisation that seeks to promote the rights, safety and health of sex workers. They’re primarily focused on Scotland but work in partnership with other sex work charities both within the UK and internationally.

You can find out more about Scot-Pep and the work they’re doing here.

Who Was The Fundraiser For?

For their 30th anniversary Scot-Pep held a fundraiser event at Glasgow Autonomous Space with the proceeds going to Ubuntu Women Shelter. UWS is a Glasgow based women’s shelter that helps those in need to find emergency shelter if they’re unable to access other homeless resources – so they’re especially useful for migrant women which in the current political climate is something we should really be looking at giving our full support to. Be sure to check out their website for more information and again it’s a great cause so if you’re able to donate then please do.

What Was My Role?

I was helping out a little with the event by doing a super short shift behind the bar. It was only an hour and it was lots of fun. All of the volunteers are super friendly and everyone at the event was cheerful and easy to chat with. 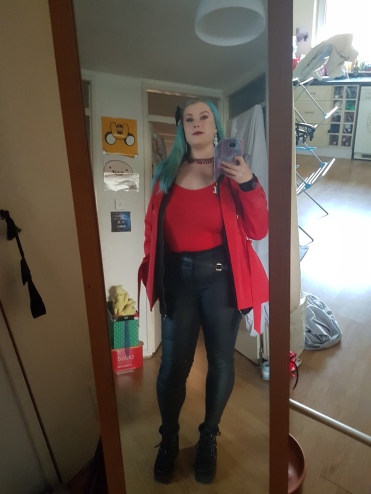 It was great! I brought Jazz along and despite getting a little lost trying to find it we were made to feel very welcomed and comfortable from the second we got in the door.

The bar was reasonably priced and had non-alcoholic options as well as alcoholic which was nice to see.

There was a quiet/safe space up stairs that you could use if you needed a bit of space as well as having well being volunteers available if you wanted someone to talk to.

The DJ was fabulous and had a great selection of music that got people up and dancing (plus her dress was super cute).

There was a raffle! Which I had no idea was going to be a thing and it had so many cool prizes. Unfortunately I wasn’t lucky enough to win any of them but I’ll be sure to track down a few of the items to buy for myself at some point haha.

Although the best part of the night was the entertainment ^_^ Jazz and I only managed to stay for the first performance as we had to catch the last train home but she was fantastic. “Lazy of the Night” was the stage name and she sang 3 songs for us whilst doing a little bit of a dance but more just putting on a show. The crowd loved it and I’m sure the other performances were just as good.

And that was that ^_^ it was a really fun night and I think they raised a fair bit of money (will hopefully update you with a figure in the near future). Hope you had a lovely weekend everyone!