Hey Lovelies, it’s been a hectic week with so many shoots happening very close together and I wanted to keep you up to date so here I go. Fair warning this will be quite long.

This was a bit of a last minute shoot. The photographer I had originally planned to shoot with was unable to shoot as his child had fallen unwell. Which is a shame but completely understandable.

Luckily Bill was able to step in and save the day. He didn’t even fuss about me dragging him all over the country park, including up and down hills that killed both of us. Plus all of the pictures turned out wonderfully. I’m so glad I got to shoot outside whilst it was such amazing weather.

Didn’t get off to the best start. Arrived at the train station early but got on the wrong train which meant I arrived later than I had planned to. Still on time but it meant I hadn’t gotten to do my makeup before meeting up with Bill. He was fine about it though and very patient as I got ready throughout the shoot.

Once we got started properly however everything went fantastically. I felt really at ease and moved between poses without having to think about it too much. Bill gave some instruction for posing as well which was good. It’s always good when the photographer gives a little direction and knows what he’s looking for.

For this shoot I was going for a sort of “festival wear” kind of look, so I had a camo outfit and a sparkly outfit. Haven’t decided on a name for each outfit yet and the shoot changed from the original idea so I don’t think I’ll be using “Festival in the Woods” but I’m sure I’ll think of something.

Sparkly Outfit – High waisted denim shorts from Primark (ribbon added by myself when the ripped part got too ripped), sparkly bra top from Primark, camo jacket from Primark and classic Doc Martens. 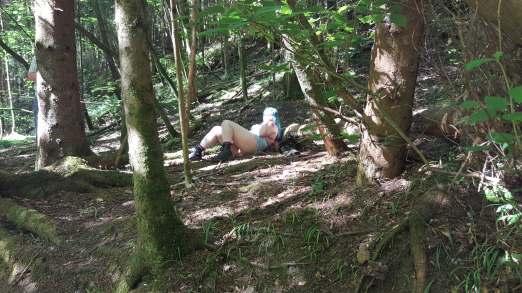 This was my second shoot with John and was about a year after our last shoot. It went really well. I had Andy as my chaperone which was nice as they know Dundee better than I do so I felt far more comfortable. We had to get up pretty early to get the bus on time and I’d been dragged out the night before by my Mum and her friends so I wasn’t the most lively to begin with. But after a few energy drinks and the excitement of a shoot kicking in, I was fine.

John was looking for a more creative style of NSFW shoot so I had brought along some fishnet body stockings which we paired with some of his own art pieces to create some very interesting looks.

I had also decided to try something new during this shoot and I recorded a short vlog about the day which you can watch here: https://www.youtube.com/watch?v=Z1HIYrxJzWY&index=3&list=PLxyWLugwPWkqjHj1ly3ioyCJ6SYTyOvMi&t=0s

However if you want to see the images from the shoot you’ll just have to wait until the set becomes available on Patreon.

I was particularly looking forward to this shoot, it was arranged by Little Red Foxes (https://purpleport.com/portfolio/littleredfoxes/ ) who also supplied the wedding dresses and provided a space to get ready before moving to the shoot location. The dresses were really pretty, I was wearing a strapless dress that had a lovely sparkly bust and the other model (Maria – https://purpleport.com/portfolio/mariala/ )was wearing a gorgeous lacy dress with a really long train. We were also given tiaras and veils to wear which really pulled the whole look together perfectly. 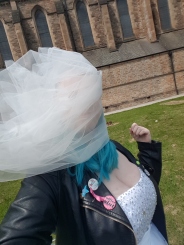 We arrived to the location – Govan Old Parish Church – a little too early so ended up spending some time messing around outside taking photos and selfies as the photographers began to arrive. We were also joined by two male models who were acting as grooms or other male roles you’d expect to see at a wedding.

As the wind was a bit chilly I’d put my coat on but this ended up sparking some great photos. A “rock star bride” sort of vibe. That’s what you get when you put a blue haired girl in a wedding dress and let her wander around in her leather coat. Was a shame I had left my Doc Martens at home.

We then moved inside the church to get some more traditional styled photos. If you’ve never been to the Old Parish Church in Govan then I recommend checking it out – it’s beautiful. Plus it’s got “The Govan Stones” ( more info here: http://www.thegovanstones.org.uk/ ).

All in all it was a great day and I’m super excited to get the photos back, I just need to track down all of the photographers haha. You can watch my vlog for this shoot by clicking on this link: https://youtu.be/h7xkoDIn4iQ

This was a very last minute photo shoot, literally arranged the day before at the end of the bridal photoshoot. Anastazia (Little Red Foxes) had been asked to run a tutored shoot at the last minute and asked Maria and I if either of us were available. Unfortunately Maria wasn’t but I was able to attend as it was in the evening.

So I put together a very simple look and made my way to the shoot location, accompanied by Andy -“the best chaperone ever”.

We arrived slightly later than I planned because I needed to eat haha but it was fine, we still arrived on time and got started around the right time. As the weather was lovely we started the shoot outside, wandering around trying to catch the last of the sunlight before then moving back to the control of the studio.

The photographer (Craig) was really fun to work with and really nice so it was a great shoot and I’m looking forward to getting some pictures back.